505 | Trails Of The Enchanted Circle

For the last twenty years the mountains of Northern New Mexico have been a favorite riding destination. Regardless if it is the topography, ski/bike culture, or green chile there is something that draws me back. While I have come to know this area well there are still many trails and peaks I have yet to explore. For my annual pilgrimage this year I wanted to focus on the variety of trails that can be accessed via the scenic Enchanted Circle. At a round trip of eighty-for miles this stretch of highway lives up to its name. The route takes travelers through epic vistas, and untouched mountain wilderness. My goal for this trip was to pick three distinct riding experiences and film several videos about them.

After making the long drive I arrived in the town Red River on a crisp Saturday afternoon. The Wild West still thrives here. Located at the top of the Enchanted Circle this beautiful ski town was going to be base camp for the week. The scenery, slopes, mining history, food, and good vibes have kept me returning year after year. Being mid- September the temps were dropping, and the aspens were starting to turn. On Monday morning I drove into the upper Red River Valley for the first ride of the trip. The objective of the day was the Middle Fork Lake Trail. This was a new experience as I had been up this route numerous times, but never on a bike. When accessing this trail one can either park where the pavement ends, or attempt the sketchy high clearance drive up to the parking lot. From the trailhead the climbing began with a few moderate switchbacks. A highlight on this ride is the mandatory creek crossing below Middle Fork Falls. Since it was early autumn the water level was low enough for pedaling to the other side. From here things became considerably steeper, and the breathing more difficult. Another set of mean switchbacks brought me to Middle Fork Lake. Sitting at 10,846 feet this is one of the many beautiful high alpine lakes in the area, and the view is well worth ride. On the descent the switchbacks put my tech skills to work since there were no berms to help carry speed. Tired and thirsty I ended the ride with a refreshing Cat Skinner IPA at the Red River Brewing Company. 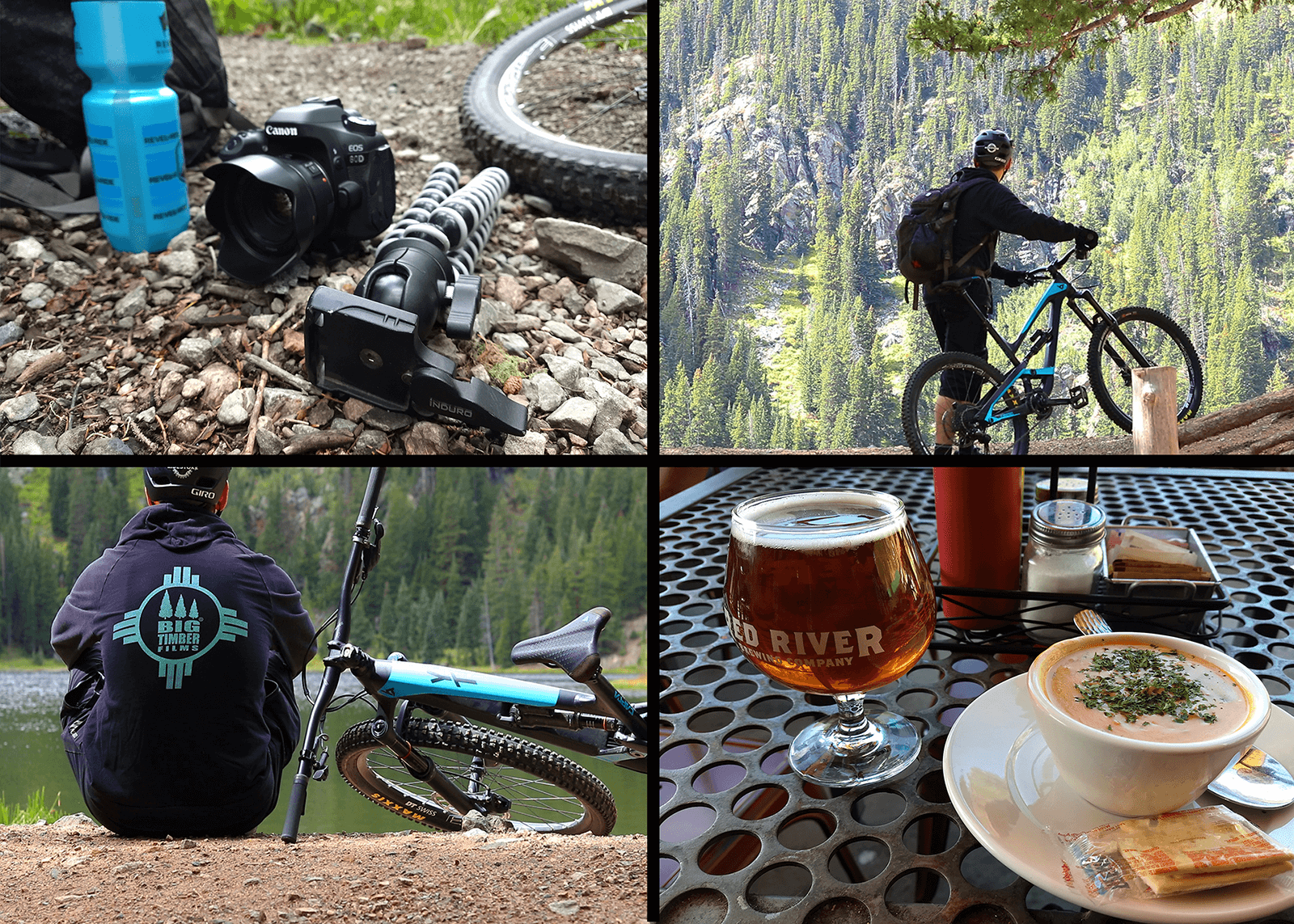 The drive up to Taos Ski Valley is sacred. I couldn’t help smiling as I watched the funky southwest buildings fade into European chalets. That magical TSV feeling was in full effect. There is so much ski history here. One brilliant man’s dream realized. While very familiar with the hiking trails accessed from the base of Chair 4 I had never been on the Northside Trails. These privately owned trails are unique as they grant riders access to the best high alpine riding in the state. From the parking lot at 9,207 ft. it was a fifteen minute ride to the Northside trailhead. After paying the ten dollar day use fee and signing the required paperwork I started my climb. The trails were well marked, and easy to follow. My plan for this adventure was to take the Frasier Mountain Road to the Overlook Trail. After passing Jean’s Meadow I noticed the incline was beginning to increase. The legs and lungs were feeling the burn, and at certain points I had to resort to a shameless hike-a-bike. Arriving at the start of the Overlook trail the road noticeably transitioned into loamy single-track. The payoff of the ride was the view of the valley from the overlook. Down below the noise of the ski area construction echoed off the slopes. The vibe was proper. After taking in the view and getting some shots for the video project it was time to head down. The descent was fast, taking only twenty minutes to reach the trailhead. Once back at the car I headed to the Stray Dog Cantina for a warm bowl of green chile stew, and a glass of Santa Fe Pale Ale. 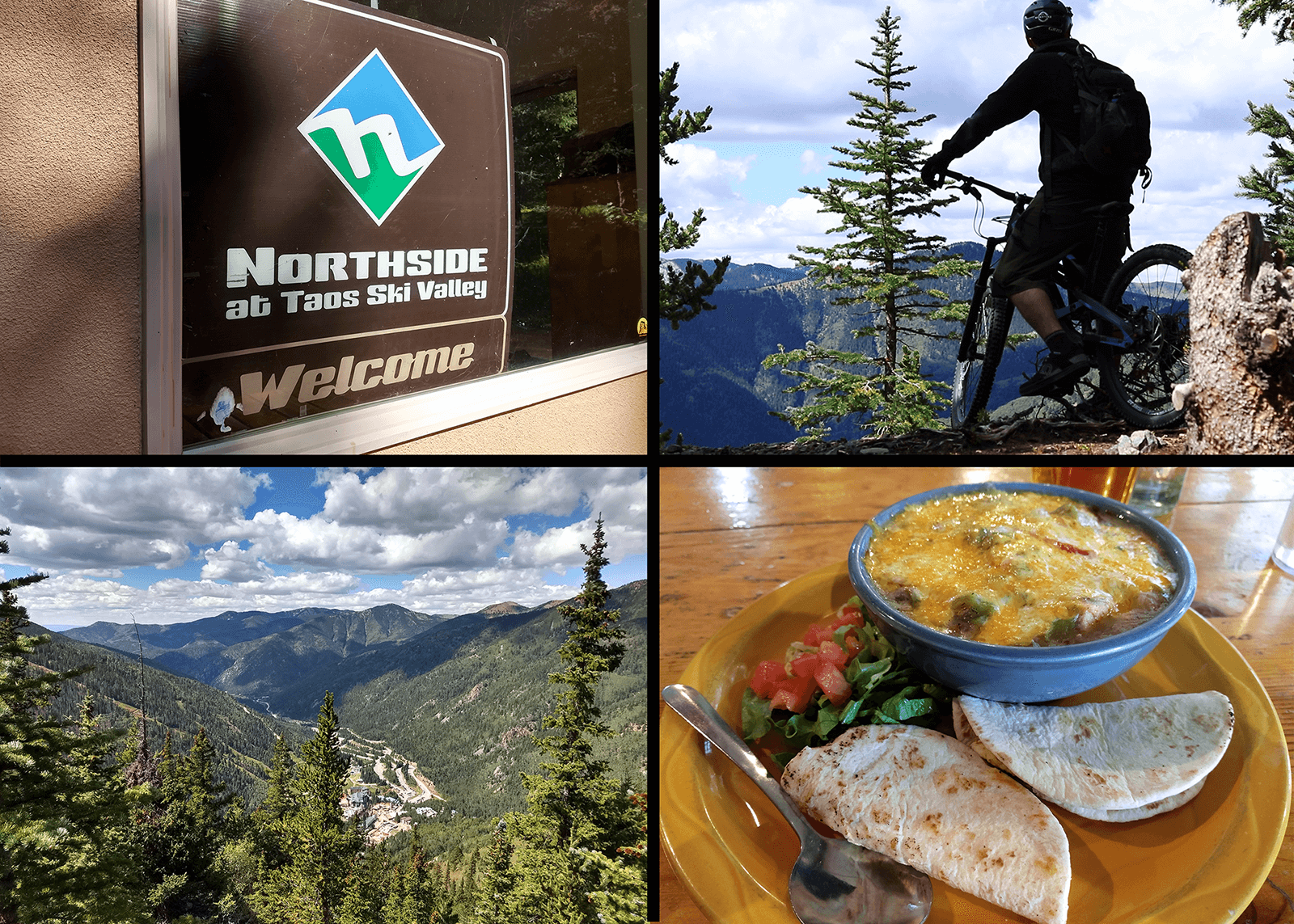 One can’t end their mountain bike journey around the Enchanted Circle without some lift-served shredding at Angelfire Bike Park. Being late Fall their operations had moved to a weekend only basis. Feeling acclimatized, my week of leg powered riding was about to pay off. I was definitely feeling the itch as I loaded my bike onto the Chile Express. Anticipation was high since the Angelfire social media had been buzzing about two new trails, “Super Diesel” and “Smoke Signals”. Unloading at the summit I dropped into the start of “Upper Supreme DH” for a warm up. Ducking out onto the access road I connected to “Diesel”. My muscle memory kicked in and the descent began. “Super Diesel” was better than I had hoped. This machine-built berm line had consistent flow, and I found it easy to carry speed. “Smoke Signals” was equally enjoyable with fun side hits to keep things spicy. After stopping for a quick chat with bike park builder Patrick West I dropped in and headed for “Boulder Dash.” By far this is my favorite line on the mountain. I could talk endlessly about the speed, flow, jump lines, and joy that this trail brings. After multiple laps on “Boulder Dash” I hit a few other favorites such as “Lower Supreme DH” and “Chutes and Ladders”. The afternoon was winding down and so was my energy level. My pre-ride electrolytes had long worn off, and my quads were seizing into rocks. A week of consistent riding was taking its toll. I greedily wanted to get one more lap on “Boulder Dash”, but my cramping legs had other ideas. Driving back to Red River I stopped at the brewery for a final round of Cat Skinner. Savoring the hoppy goodness I reviewed my images from the week. Another trip was in the bag, and I had already begun planning the next one. 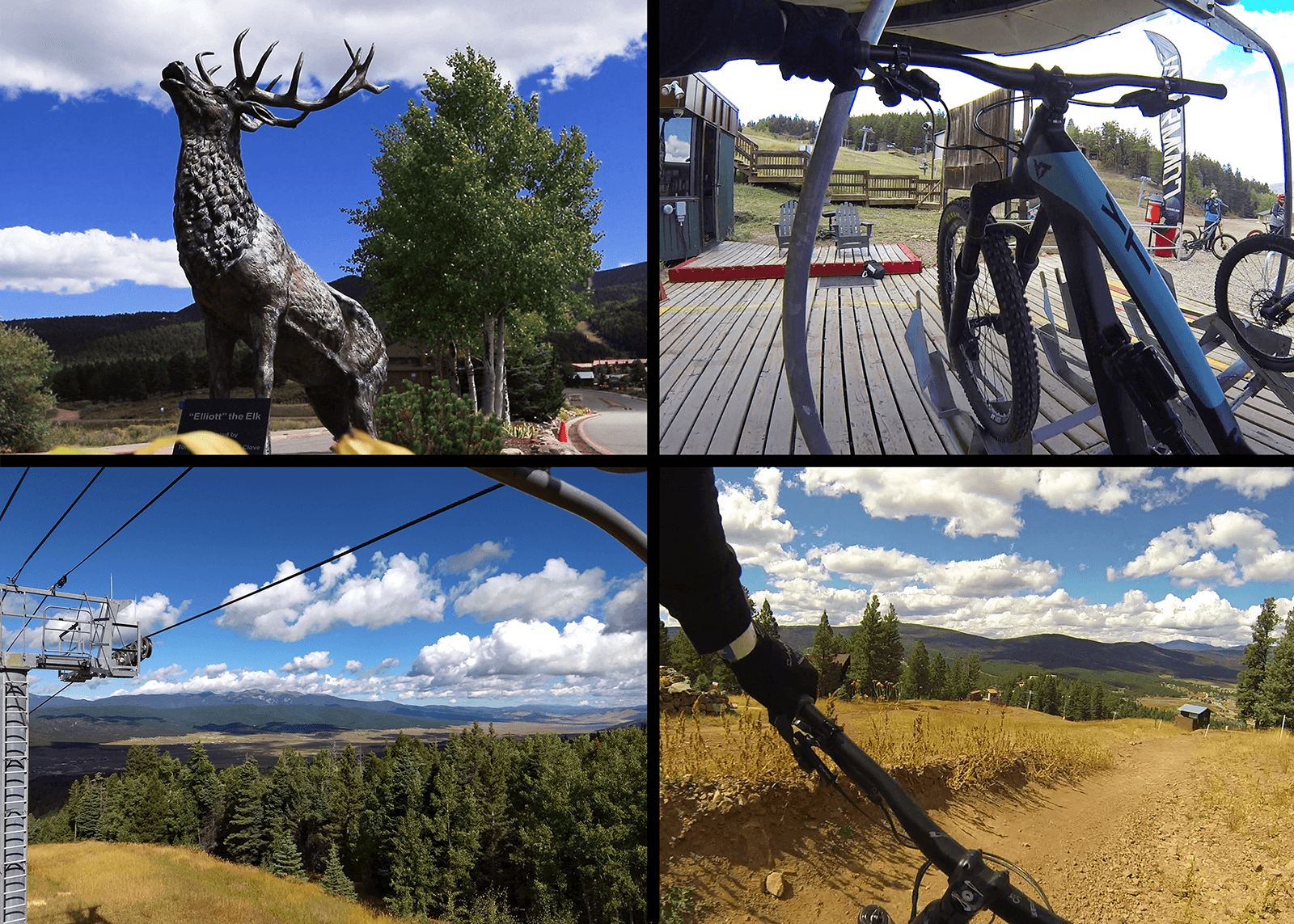